BMW has unveiled an all-electric concept scooter that is probably something straight out of the future. Even though it may just be a concept, the scooter looks stylish and has zero emissions due to it being electric. The scooter was unveiled at the Concorso d’Eleganza Villa d’Este 2017 in Italy and we’re super impressed. 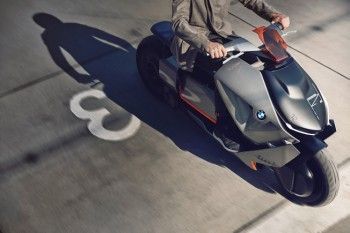 The concept is based on the previous Motorrad Vision Next 100 model and is yet another addition to BMW’s portfolio of electronic vehicles that will make an appearance in the market eventually.

“The BMW Motorrad Concept Link is not based on today’s concepts, but rather meets the basic functionality needs, the technical architecture and the digital reality of today’s users,” stated Alexander Buckan, Head of Vehicle Design at BMW Motorrad. “The technical realities of electric drive — such as the flat energy packs in the underfloor and the compact drive on the rear wheel — allowed us to create a highly distinctive design which shapes a new segment.” 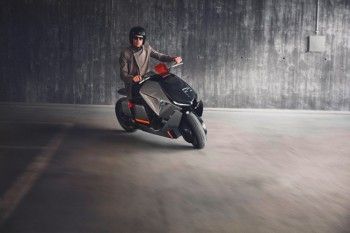 Steve Hanley further explained the concept to the website Gas2:

“Everything about the Concept Zero scooter is as futuristic as BMW engineers could make it. Although it is not intended for production, some of its features could show up on BMW products in years to come. There is no traditional gauge cluster, for instance. Instead, information about speed and range are displayed directly onto the windscreen via a heads up display. All other features of the bike are controlled by a touchscreen.” “A special connected ‘rider’s jacket’ allows communication with the scooter using hand gestures. The Concept Zero also knows what is in a riders calendar and will choose music for the journey it considers appropriate for the rider’s mood and tastes. Is it possible it could play ‘Born To Be Wild’ by Steppenwolf once it breaks free of traffic and gets out of the city and onto a two-lane road?”

The concept shooter also has a touchscreen dashboard that can be synced with an online calendar and track your progress. While using the calendar, the scooter will always know where you want to go and it even has a smart seat which detects the rider’s presence. The smart seat will also recognise your butt so that it will adjust on its own to suit each different rider.

The concept scooter is also very fast, as claimed by BMW, however, no specific details were mentioned. ‘The technical realities of electric drive – such as the flat energy packs in the underfloor and the compact drive on the rear wheel – allowed us to create a highly distinctive design which shapes a new segment,’ explained Alexander Buckan, Head of Vehicle Design at BMW Motorrad. 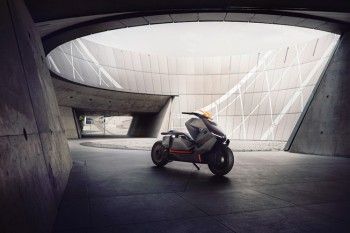 ‘The resulting expressive power of the vehicle is absolutely new for BMW Motorrad and breaks with all conventional viewing patterns.’

BMW has confidently reassured that the scooter is capable of fast acceleration and also has easy handling. You can watch the scooter in action below: